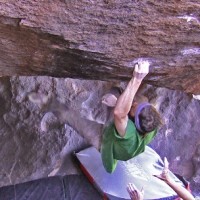 Paul Robinson made his return of sorts to outdoor bouldering this past weekend at the Hueco Rock Rodeo.  Apparently spending the past 5+ months rehabbing from his broken ankle hasn’t slowed him down much.  In fact, his performance at the HRR combined with his performance at ABS Nationals last month makes it look as though Paul is as strong as ever.  During the comp he repeated Terre De Sienne (V14), Diabolique (V13), Algerita (now solid V13 after a broken hold), El Techo De Los Tres Bs (given V13 for the comp but now considered easier due to a recent hold break), Diaphanous Sea (V12) and Loaded Direct (V12).  A nice total of 77 V points in only 6 problems!

Here are the rest of the results:

Big ups to Andy Mann for winning the photo contest as well.

I will update this post as more information becomes available.

← Where In The World Is Chris Sharma?
Lynn Hill Interview At TheLowDown →