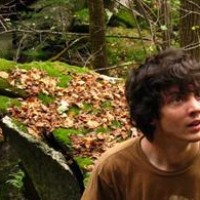 I just received word that Paul Robinson has made the first repeat of Dave Graham’s Psychedelic (hard 5.14) in St. George, UT.  Unrepeated and mostly untried since its FA in 2001, Psychedelic is basically a (really hard) boulder problem on a rope.  In other words, it’s a perfect objective for someone like Paul Robinson.  He described the route like this in an interview with Mountains and Water:

It [Pyschedelic] is long moves on small holds up a slightly overhung wall. It is 60 feet and can be summed up as a v6 boulder to a v13 boulder to about 30 feet of 13a to the top.

This old ClimbXMedia video of Dave Graham on the FA back in 2001 will give you a pretty good idea of the difficulties encountered:

It took Robinson a few days of work to piece together the moves as well as to get the right conditions for the small crimps on the route before he was able to snag the send.  Counting The Fly (V14 or 5.14+) at Rumney, this is only Robinson’s 2nd 5.14 sport route, and the observant among you might notice a trend with these 2 routes.

After his stint in St. George, Paul is looking to tick another long term goal off his list when in the event that he heads to Bishop, CA later this week to try for the FA of the Rastaman Vibration SDS project.

Update: Here is a bit more from Paul on how things went:

It went great! Very hard and very amazing rock! It was amazing to do a hard route having never really done one before. From 13c to 14d (not counting the fly) ! Now its on to breaking the law!

4 Responses to Paul Robinson Does 2nd Ascent Of Psychedelic (5.14c/d)