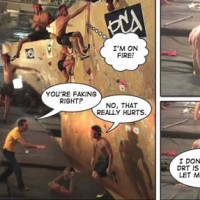 Be Careful What You (Sort Of) Wish For

As climbers we spend most of our time concerned about avoiding injuries to our precious upper body extremities, most obviously our hands.  Injuries to seemingly non-essential climbing tools like our legs are usually not at the forefront of our minds.  In fact, last year I often argued with Mrs. Narc that I would MUCH rather have a leg injury than an arm injury.  I was pretty emphatic about it really.  This was at the time that she was spending 6 weeks on the couch with a broken ankle so she was nonplussed to say the least.  After the events of last week in Rocktown, I’m starting to come around to her point.

Concerned with getting the most mileage out of my injured finger and non-existent skin, I didn’t do much warming up at the beginning of a day of climbing at Rocktown.  I spent a few minutes doing jumping jacks to stay warm while the rest of the crew worked The Orb, and when we moved to the Sherman Photo roof I got right down to business.

Problem one, Nose Candy, went down in short order and I moved 5 feet to the right to try Sherman Photo Roof.  Sherman Photo starts on a large jug and moves to two pretty poor crimps on a roof.  The key (for me) to using these crimps is a really good heel hook on the starting jug.  I was actually surprised how good the heel hook was and I nearly flashed the problem.

Feeling pretty pumped (the good kind), I pulled on for a second go.  Pull on the start hold, reach up left to 1st miserable crimp, right foot lodged firmly behind the start hold, pull like hell with my right leg and then…POP…POP.  As I collapsed on the pad the rest of the crew ran for cover as they thought we were taking enemy gunfire.  Well, not really, but they were a bit confused as to where this noise had come from.

Unfortunately, the noise came from my knee, and I spent the rest of the trip hobbling around looking for problems that didn’t require much use of the right leg (there are quite a few actually).  Back home I was resistant to the idea of seeking medical attention due to my propping up the entire health care industry in 2008 with my frequent trips to the Doctor.  However, I finally succumbed and sought help in the form of an MRI for which the results are still pending.  Apparently I might have torn my meniscus a disruption to my LCL, but I remain stubbornly optimistic.

The moral of the story is that despite the amount of time we dedicate to keeping our precious fingers, elbows and shoulders in tact it is just as important to make sure the rest of our bodies don’t fall apart either.  It’s not that hard to drive to your job that pays for your climbing trips with a blown tendon, but a busted up leg is another story.

To drive home this point, here is a great video I came across from Jason Kehl.  It’s from a 2003 PCA comp in Salt Lake City, UT where he tears his ACL dismounting from a problem but perseveres to finish the comp.  Unfortunately it looks like Kehl is still having problems even 6 years later!

This is what happen to me… from Cryptochild on Vimeo.

16 Responses to Be Careful What You (Sort Of) Wish For