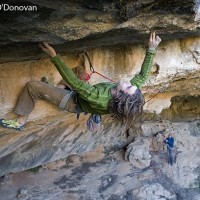 Since his first ascent of Golpe De Estado back in December, Chris Sharma has been keeping things low key.  He is still holding it down in Spain, but poor weather has severely hampered his and Dani Andrada’s ability to open new lines.  This is not to say that the entire winter has been a bust thus far.  From the Spanish language blog of Dani Andrada my High School Spanish skills helped me to glean a few tidbits of what has been going down in areas like Margalef.

Recently, Sharma did the first ascent of two routes in Oliana that I would say classify as moderates for him in Eye Fish (8b+ or 5.14a) and Gorilas en la niebla (Gorillas In The Mist – 8b/+ or hard 5.13d).  He and Andrada have also been bolting harder lines in Margalef in anticipation of better conditions.  Sharma apparently has his eyes on a potential 9b project called First Round First Minute and Andrada is eyeing up a possible 8c+ line that goes right called Buma ye. Other hard projects include Blankito, Tierra de nadie (the crazy long roof pictured in Andrada’s blog?) and La ley innata (The Innate Law?).

From the looks of it, there is still more roadside virgin rock in Spain for hard climbing than they know what to do with which must be pretty frustrating for people trying to find hard routes here in the U.S!

In other news from Spain, youngster David Firnenburg recently climbing his first 5.14b L’espiedimonis at the tender young age of 13!