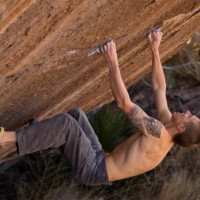 Australia’s Chris Webb Parsons, who is most famous for his repeat of Dai Koyamada’s Wheel Of Life (V16), is in the U.S. for a 6 week trip split between Hueco Tanks, TX and Bishop, CA.  It looks like the months he spent training while working to finance the trip have paid off as he hit the ground running in Hueco.  In the first few days of the trip he already flashed Diaphanous Sea (V12, thinks V11), repeated Fred Nicole’s classic testpiece Slashface (V13, 4 goes) and made a ridiculously fast 2nd try ascent of Chris Sharma’s Diabolique (V13).  You can follow his trip at his website, as well as the blog of Dave Pearson.

Japan’s Keita Mogaki is back in the U.S. as well.  After repeating Trice (V12) on Flagstaff Mt. in Boulder, he headed south to Hueco.  Most notable among his 3 V13 repeats is a 1 day ascent of Fred Nicole’s Coeur de Leon.  Originally graded V14, it looks like a refinement of knee bar beta has made this problem easier with more than one climber suggesting a grade of V13, and one suggesting a grade of V12.  You can read an old interview with Mogaki here.

Not to leave out the home team, Phil Schaal has been continuing his good form with recent repeats of Nagual (V13) and El Techo De Los Tres Bs (V13).  Check his blog for video of his recent sends.

It sounds like prime sending conditions are getting hard to come by, so it should be interesting to see what the likes of CWP can get done in the next couple of weeks.

Update:  According to commenter philip, the low key Matt Bosley has been climbing well down in Hueco too.  His recent ticks include Nagual, Coeur De Leon and El Techo.  Thanks for the update!

Update #2:  Schaal has added Diabolique (V13) to his ticklist as well

Beastin’ It from Phillip Schaal on Vimeo.