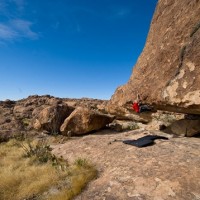 Sendtrain Heating Up In Hueco Tanks

It’s the winter season in Hueco Tanks, TX and with strong youngsters all across the fruited plains lacking anything else to do, the sends are starting to roll in.  A couple of years back, the V13 du jour seemed to be El Techo De Los Tres Bs with many climbers sending this onetime V14.  This year the V13 getting the most action right now seems to be the very classic looking Crown Of Aragorn.  Crown has seen recent repeats from Jimmy Webb, Brian Antheunisse, Brion Voges and Phil Schaal.

It should be interesting to see how the rest of the season develops.  Daniel Woods has vowed to return to complete the 3rd ascent of Fred Nicole’s Terremer (V15).  Other than that possibility, it remains to be seen how much of what takes place this winter in Hueco will be newsworthy.  How long can one be impressed with the umpteenth repeat of 10 year old V13s?  Will any new proud and difficult lines be put up?

I’m not trying to be a downer, as any ascent of double digit problems is impressive to me, but this is a topic that has been receiving a fair amount of attention lately.  Namely, how much value does one put in repeating problems vs. the establishment of new problems.  Some people are saying that the younger “8a.nu generation” of climbers coming of age right now are more concerned with repeating problems for vanity purposes than putting in the work needed for new problems.   I’m not sure I agree 100%, but it is certainly something to think about.

If you are looking for a few places to keep up to date with whatever it is that is going on in Hueco Tanks, here are a few blogs from people in Hueco right now:

If you are seeing news from Hueco anyhere else, feel free to share them in the comments.

15 Responses to Sendtrain Heating Up In Hueco Tanks