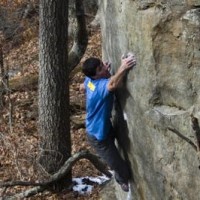 Over the past month, as Fall conditions have finally arrived here in Wisconsin, I have been slowly working my way through some of the harder problems at Governor Dodge in an attempt to get some fitness back.  The end goal has been to repeat the classic problem Sandstone Violence (V8).  I have been wanting to do this problem ever since I read about its FA by Jason Huston 2 years ago, and it is something I have been working toward throughout my entire rehab this year.

The problem Sandstone Violence has (in my opinion) the recipe for a perfect boulder problem.  It begins and ends on a jug, climbs using 4 bad crimps and has a bit of height to it.  The only negative thing that one could say about the problem is that one of the crimps is a bit sharp, but I digress.

I first gave the problem some serious attempts a couple of weeks back and quickly worked out every move save for the last one.  I returned this past Wednesday with fresher skin and the video of Nic’s ‘jump’ beta ingrained in my mind.  After a couple of misfires, I committed to Nic’s beta for the last move and stuck the jug!  While climbing a V8 is not impressive in the grand scheme of things, I was very pleased to climb something near my pre-injury limits.  Hopefully this is a sign that 2009 will be a good year.

Saturday was another fine day here in Wisconsin with temps in the mid-40’s, so I made the 2 hour trip out to the Dodge.  With no real plan for once, I met Chris, Jay, Kayte, Paul and John for a day of messing around on the boulders at Group Camp B.  Chris and I both came agonizingly close to repeating Battle Of The Bulge (V7ish, unrepeated?) until I suffered a badly split tip on the problem’s incredibly sharp holds.  I taped up to stem the flow of blood to give it a few more goes, but in the end I had to give up my aspirations of repeating it.  Fortunately though, the day was not lost (see below).

Given that the Dodge is usually deserted during the times I have climbed there, it was good to meet some new people on Saturday.  I, of course, did what any self respecting Narc would do and made them take pictures of me repeating Sandstone Violence… Thanks to Kayte for taking the pictures!