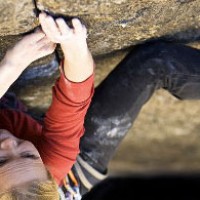 I wish I had some sort of excuse as to why it has taken me 5 months to share my thoughts about the latest release from Big Up Productions, Dosage V.  In my defense, the glut of information I provided in the run up to its release combined with Big Up’s reputation as the leading climbing filmmaker of our time should have been sufficient motivation for you to go out and get it.  If not, read on…

To get a better idea of what to expect in Dosage V check out the trailer, a few other reviews, and my exhaustive list of what you will see in the movie.  As a bonus, the extras section on the DVD has even more awesome action.  If that doesn’t pique your interest, I’m not sure there is much I can say in this space to convince you otherwise.  Suffice it to say, if you enjoyed any part of Dosages I – IV, you will almost certainly enjoy the fifth installment.

It doesn’t get much better.

As an aside to this review, I want to give Big Up some credit for how they handled the Michael Fuselier American Gangster (5.14b) footage in the film.  Without rehashing old news too much, there was controversy earlier this year over the alleged manufacturing of some holds on this route during the filming of its FA by Fuselier.  Given that this route was to be the centerpiece of the dose on sport climbing in China, it left the guys at Big Up in an uncomfortable position.  Should they keep it as the main part of the dose or would it be better to downplay it a bit (or remove it completely)?
buy doxycycline online https://langleyrx.com/dir/doxycycline.html no prescription

I know that they wrestled with the decision, and in the end they decided to put more focus on other aspects of the China footage in lieu of American Gangster.  The American Gangster footage is still there, but if you don’t know what you are looking for you will miss it completely.  I think that this decision was pretty admirable on the part of Big Up, and the dose still turned out great.