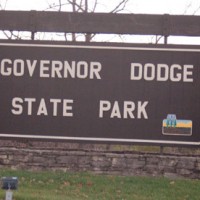 Theater Of The Absurd

My Dad often asks me why I don’t just use a ladder to get to the top of a boulder when I tell him about our various bouldering excursions.  That’s a valid question I suppose, but what he doesn’t understand is all the great aspects of climbing that go into a day at the boulders.  Things like beautiful weather, great surroundings and good friends all helping you push your physical limits to surmount that boulder combine to make climbing the great sport it is.
buy nolvadex online https://bereniceelectrolysis.com/images/photoalbum/jpg/nolvadex.html no prescription

After spending the better half of the week closely monitoring the forecast in the hopes that a) it would finally stop raining and b) the temperatures would climb above 35 degrees, I was pleased to see that Sunday’s forecast called for temps in the mid-30s with a minor chance for some snow.  On Sunday morning I set off on a solo mission for Governor Dodge by 6 am and arrived at the boulders around 8.  I had my sites set on completing a trifecta of harder (for me) problems that I hadn’t tried yet:  Alpine Bouldering Club (V6), Illusions Of Paradise (V7) and Flavor Savor (V5).

After giving up on properly warming up due to how cold it was, I made my way into the woods in search of Alpine Bouldering Club (ABC).  ABC is a cool new problem that climbs a series of right facing crimpers out an overhanging prow to a slopey topout.  After being thwarted by the snowy topout (see below) on my flash attempt, I was able to put things together a couple of tries later.
buy premarin online https://bereniceelectrolysis.com/images/photoalbum/jpg/premarin.html no prescription

While ABC doesn’t have the most interesting moves (I mainly just bumped my way up), it has incredibly good rock by Dodge standards which makes it very worthwhile to check out.

When I arrived at the ABC boulder it had begun to snow which created a really cool scene.  However, it also created a sloppy mess whereby everything was getting wet.  If you want a good laugh, just picture a lone climber out in the woods struggling to get on top of a snow covered boulder with his feet only a few feet from the ground.  That pretty much sums up how I must have looked on this problem.  Back to the report…

With objective #1 in the bag and conditions deteriorating quickly, I made the short drive to check out IOP.  I was pleased to see that its horizontal nature was protecting all the holds from getting wet and quickly went through the beta in my mind.  I pulled on for my flash go and before I knew it I was standing on top of the problem.  It was one of those rare climbs where I was in the zone, and I couldn’t even remember how I had gotten to the top.  I was psyched to say the least (picture a great deal of fist pumping toward noone in particular).  While there are a lot of minor nitpicky negatives you could point out about this problem, its status as one of the only roof boulder problems in the state more than makes up for them.  My unnatural lankiness allowed me to span the roof more easily than shorter folks out there which might explain my feeling that IOP felt easy for V7.  Either way, props to Sweatpants for finding it, cleaning it and sending it.

Here’s footage of Mr. Sweatpants re-enacting my send of IOP 3 months before it happened (AKA him doing the FA):

At this point in the day, it was snowing pretty good and it was getting treacherous to even walk around.  I slipped my way up the trail to check out Flavor Savor only to find that its entire right side was covered in snow.  It looks like an amazing line though so I hope to get back to try it before winter arrives in full force.
buy zydena online https://bereniceelectrolysis.com/images/photoalbum/jpg/zydena.html no prescription

I guess my Dad might have a point, but then again he spends hours on end freezing in the woods trying to kill animals so I have that on him.

13 Responses to Theater Of The Absurd