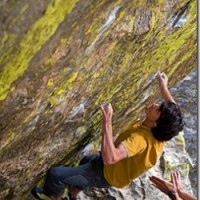 As usual, I go away from a computer for a weekend and the sendtrain begins… ← Before They Were Stars
Devil’s Lake Trad →